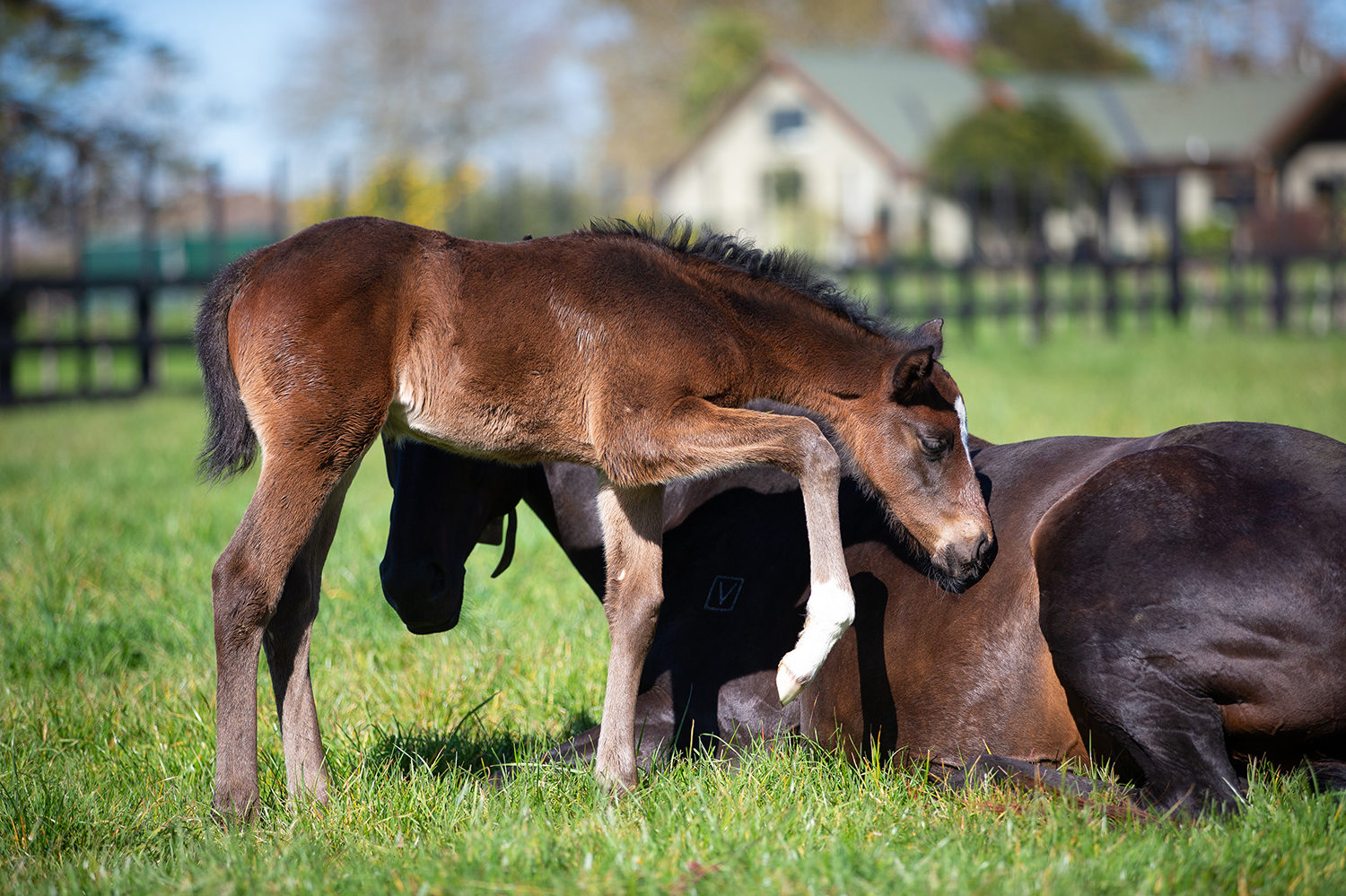 Three decades of high-class racehorses, exceptional broodmares and sale-topping yearlings have firmly established Pencarrow as one of New Zealand’s most esteemed thoroughbred nurseries, and the latest crop of new foals have now started to arrive for the 2021 breeding season.

Sir Peter Vela and his late brother Philip have bred and raced fillies on the world thoroughbred stage for more than 30 years, and their blue-and-white hooped colours have become synonymous with quality bloodlines and elite racetrack performance.

The Velas were New Zealand Breeders of the Year in 2000 and 2002, and they have bred no fewer than 19 individual Group One winners among a star-studded roll of honour.

The latest additions to the Pencarrow dynasty are the 2021 foal crop, of which there have been three eagerly anticipated arrivals to date.

The first, born on August 13, is a colt by Group One-winning freshman stallion Alabama Express out of Surtout (NZ) (Cape Blanco). This is the first foal out of the unraced Surtout, who is a half-sister to the stakes winners and Group One placegetters Supera (NZ) (Savabeel) and Eleonora (NZ) (Makfi).

Surtout’s granddam is Ethereal, most famous for being the last horse to complete the famous Caulfield Cup (2400m) and Melbourne Cup (3200m) double in the same season in 2001, while the great Romanee Conti is the third dam.

The following day, August 14, Pencarrow welcomed a colt by Caulfield Guineas (1600m) winner Super Seth out of Corinthia (NZ) (O’Reilly). An unraced half-sister to the Group One winner De Beers (NZ) (Quest for Fame), Corinthia is already the dam of two winners from two named foals – including the Listed winner and Group Two-placed Siracusa (NZ) (Sebring).

Another arrival on August 16 was a filly foal by Vadamos out of Paris (NZ) (More than Ready). Herself a placegetter in Australia, Paris is a daughter of Pencarrow’s Group One New Zealand 1000 Guineas (1600m) winner Insouciant (NZ) (Keeper), from the family of fellow Group One performers Chateauneuf Dupape (NZ) (Darci Brahma), Dorabella (NZ) (Postponed), Crusoe (NZ) (Volksraad) and Media Sensation (I Am Invincible).

Completing the first group of newborn foals (for now) at Pencarrow is a Written Tycoon colt out of blueblood Pencarrow mare Dolmabache (NZ) (Redoute’s Choice). She was an elite performer on the track winning at Group Two level & running second in the Group One Waikato RC International Stakes (2000m) behind NZ Derby winner Sangster (NZ) (Savabeel). An interesting aspect of this colt’s family is that every black-type winner on the pedigree page was bred by Pencarrow Stud, with the only exceptions being two stakes winners on the very last line.

View the next generation of Pencarrow foal arrivals here.

With a smart turn of foot, promising three-year-old Ranch Hand (Fastnet Rock) sprinted to black-type success at Flemington on Saturday for his part-owner Sir Peter Vela in the A$160,000 Listed Winning Edge Poseidon Stakes (1100m).