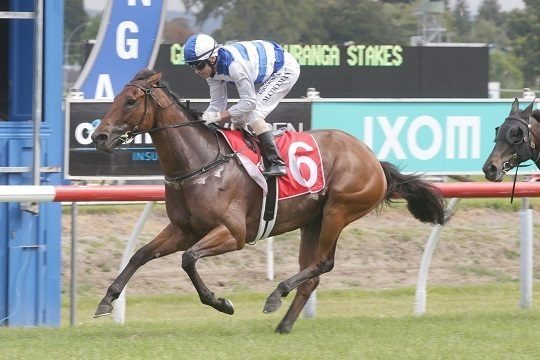 Trained by Ken and Bev Kelso, Supera emerged as a rising star of New Zealand racing last season with victories in the Group 3 Anniversary (1600m) and Group 2 Travis Stakes (2000m), along with a second placing in the Group 1 New Zealand Thoroughbred Breeders’ Stakes (1600m).

She resumed with a close second placing under a big weight at Ellerslie last month, and on Saturday she showed her star quality at weight-for-age.

Ridden by Michael Coleman, Supera overcame an energy-sapping wide run and finished over the top of the front-running The Mitigator (Master of Design) for an emphatic victory by two and a quarter lengths.

“She sat three wide the trip with no cover and was dominant in the end,” Ken Kelso said. “She has got a hell of a lot of ability.

“She’s got a lot of improvement in her as her temperament is getting better, so it should be onwards and upwards from here.

“She’s definitely stronger. When you look at her, she has really developed into a lovely mare.

“She’s not easy, but you put up with them when they’re like this.”

Owned by Sir Peter Vela and bred by Pencarrow Thoroughbreds Ltd, Supera has now had 15 starts for seven wins, four placings and $252,925 in stakes.

Supera is out of Sopra Tutto (NZ) (Van Nistelrooy), who is the dam of four winners from five foals to race. The best of those to date has been Eleonora (NZ) (Makfi), who won two Group 3 races and placed in the Group 1 VRC Oaks (2500m).

The second dam is the champion mare Ethereal (NZ) (Rhythm) who earned more than $4.7 million with Group 1 victories in the Melbourne Cup, Caulfield Cup, BMW and Queensland Oaks.