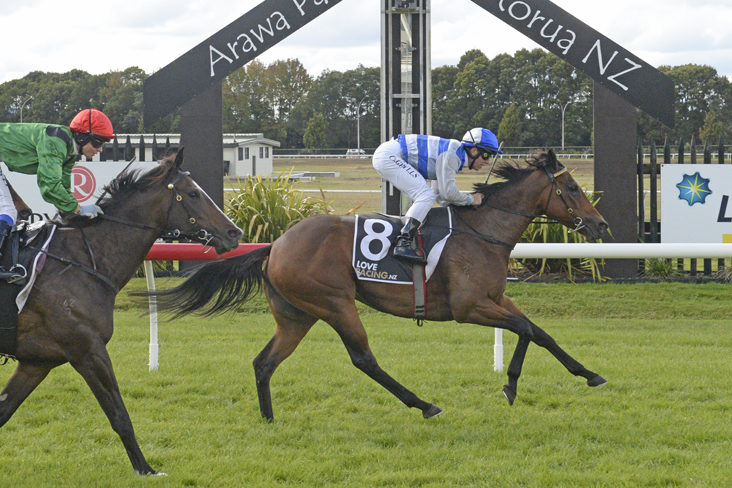 Three-year-old Pencarrow filly Calliope (NZ) (Charm Spirit) – a half-sister to this season’s stakes winner in the same colours, Siracusa (NZ) (Sebring) – collected the first win of her career with an impressive performance in Wednesday’s $10,000 Rydges Rotorua (1230m) at Arawa Park.

Ridden by Craig Grylls for trainers Lance O’Sullivan and Andrew Scott, Calliope sat in sixth place on the rail before moving up behind the front-running Caminata (NZ) (Darci Brahma) coming up to the home turn.

She angled off the heels of that runner at the top of the straight and then surged past, taking command and maintaining a comfortable one-length margin to the finish line.

Before Wednesday’s stylish win, Calliope had made only one start – an eighth placing at Matamata in the spring, where the first two placegetters Tinker McPhee (Nostradamus) and Brando (NZ) (Savabeel) both went on to perform at Group One level.

Calliope was bred by Pencarrow and is raced by Sir Peter Vela.

She is by Windsor Park shuttle stallion Charm Spirit, who is the sire of 204 winners from 337 runners including nine individual stakes winners.

They are both out of Chimeara (Danehill), who was placed in the Group Three Gold Trail Stakes (1200m) and comes from the iconic Eight Carat family. She is out of the multiple Group One winner Tristalove (NZ) (Sir Tristram), who is also the dam of stakes winners Viking Ruler (Danehill), Lovetrista (Rock of Gibraltar), Kempinsky (Danehill) and Diamond Like (Danehill).

Corinthia is the dam of two foals to race, with both now winners. Siracusa, born in 2016, has stepped up to black-type class this season with a victory in the Listed Karaka Classic (1600m) and placings in the Group Two Japan Trophy (1600m) and Tauranga Stakes (1600m).

Calliope, a year younger than Siracusa, has now had two starts for one win.

Corinthia produced a colt and a filly by Charm Spirit in 2018 and 2019 respectively, and had a colt by the former Pencarrow Group One performer Eminent in the spring of 2020.