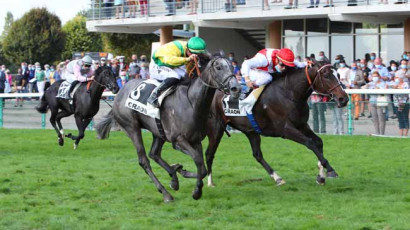 Stakes Success in France for Pencarrow

Ridden by Cristian Demuro for trainer Jean-Claude Rouget, Alzire showed stacks of class and courage to score by a nose in a thrilling battle with Musetta (Dark Angel).

Those two runners had the finish all to themselves, with the third placegetter finishing four lengths adrift.

Racing in the colours of Haras Voltaire, Alzire has now had 10 starts for four wins and a third placing in the Listed Prix de la Cochere (1600m).

“We bred her with Nico de Chambure by Shamardal out of the beautifully bred Purely Priceless,” Sir Peter Vela said.

Purely Priceless herself won two races, and she is the dam of two winners from two foals to race. Both of them are now stakes performers, with Alzire’s half-brother Palmyre (Dansili) a placegetter in the Listed Prix Charles Laffitte (2000m) and Grand Prix de Clairefontaine (2400m).