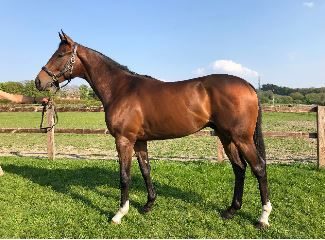 Stellar Weekend Around the World for Pencarrow

Pencarrow racing has enjoyed a week to remember, celebrating a series of successes across both hemispheres.

There was success on international soil last weekend after Tasman Bay (Le Havre) and Soyounique (Siyouni) both scored notable victories in the United Kingdom, while Marsden Cross (Camelot) also placed.

Owner-trainer Combination off the Mark

British winners Tasman Bay and Soyounique are both trained by legendary olympian Sir Mark Todd and owned by Sir Peter Vela, and they were the first two winners based in Newcastle for this illustrious owner-trainer combination.

Tasman Bay cleared maiden grade at just his second attempt in the Bombadier Novice Stakes over one mile (1600m) at Newcastle on Friday 26 March.

Ridden by David Probert, the three-year-old colt sat in a handy position behind the leaders before taking charge in the straight and opening up a dominant winning margin of three and a half lengths.

Sir Mark Todd believes Tasman Bay’s victory could be a stepping stone to further Group One success in the future.

“I always thought he was lovely big horse with a beautiful staying pedigree but he needed a bit of time.”

“He had a nomination for the Derby from the beginning and we decided we would give him a run over a mile at Newcastle.

“He ran a lovely, straight mile on a good surface and there were a few nominated for the race, including current performer King Vega (Lope de Wega) who was rated 106, which seemed to scare all the other runners off.

“We decided we had to kick off somewhere, so we took our chance. He ran extremely well and bet the hot favourite quite comfortably.

“Our next target is the Group Three Sandown Classic Trial on the 23rd of April.

“He is a big horse and he wouldn’t want a lot of racing, so we’re going to take him along quietly.

“If he does make it to the Derby he will only have two more runs before that,” commented Todd.

Purely Priceless herself won two races, and she is now the dam of three winners from four foals to race. Alzire is a dual Listed winner, while Palmyre (Dansili) has placed at black-type level.

“Sir Peter bred him in partnership with a stud in France and bought him back out of the Arqana Deauville August Yearling Sale in 2019.”

“He has a suburb pedigree and I believe if he goes well enough over here, he could a horse that Sir Peter would bring back to New Zealand to stand at stud.”

Soyounique, meanwhile, won the six-furlong (1200m) Heed Your Hunch at Betway Handicap at Wolverhampton on Saturday 27 March. Also ridden by Probert, the four-year-old had plenty up his sleeve in the straight to outduel the runner-up Puchita (Acclamation) and win by a head.

Raced by Sir Peter Vela in partnership with Professor Wayne Mcllriath, Soyounique has now had a win and a placing from nine starts.

“It was his tenth start and up until now he wanted to do everything wrong in his races,” commented Todd.

“He is a horse that is bred to run a mile and a quarter. We had tried him over seven furlongs and a mile, but made the decision to drop back to six furlongs to get him to settle.

“He ran really well, showed determination, was headed turning for home and fought back strong, it was really pleasing effort.

Soyounique is by high-quality stallion Siyouni out of Adventure Seeker (Bering), who won two races including the Listed Prix de Liancourt (2100m). She also finished second in the Group Three Prix Cleopatre (2100m) and fourth in the Grade One EP Taylor Stakes (2000m) in Canada.

“She is a lovely staying-bred filly, is going to be progressive and get better as the season goes on as an Autumn filly.”

“She ran into this race with two really smart runs prior.

“She is perfectly capable of getting backtype in the Autumn over the longer staying races with her beautiful pedigree,” Todd said.

With an established training facility in Wiltshire United Kingdom, Sir Mark Todd receives an assortment of support from across the globe with kiwi industry heavyweights backing him from their home soil, including Brenden and Jo Lindsay, and Henrietta, the Dowager Duchess of Bedford.

Sir Peter Vela-owned runners also enjoyed success in other parts of the globe, with I Say Hello (NZ) (Iffraaj) winning impressively across the Tasman at Newcastle, while Pencarrow graduate Golden Link (NZ) (Per Incanto) won at Sha Tin in Hong Kong.